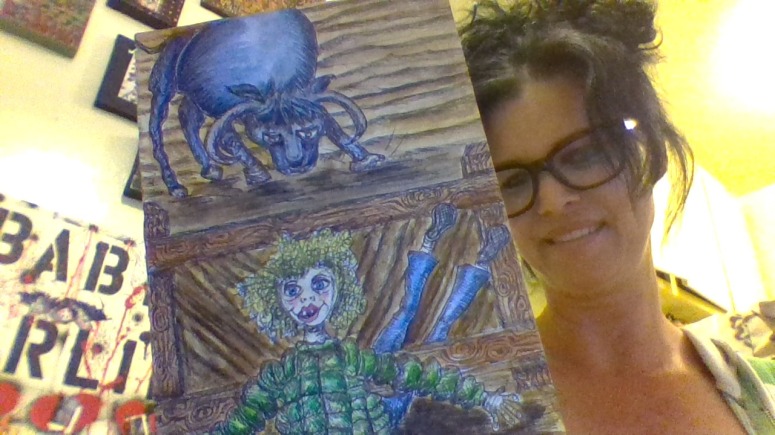 A challenging stare right into the  Zodiacs eyes…..ya I’m a Taurus stubborn and bull headed as can be!

Hands on my hips feeling like fucking super woman!

The beast stamped its hooves with rage in his eyes.

Hemingway would be proud.

I ran around the bullpen grinning, taunting  excited,  laughing, squealing with delight!

Turning around sticking out my little tongue, flapping my hands with my thumbs in my ears, and wriggling my hips at the beast.

It was a big one with a hump. The Brahma kind my Papa told me years later.

“Your Grandpa, Dusty Rhodes, rode Brahma’s broke every bone in his body. Those beast are the most dangerous bulls around you could have been maimed for Godsakes!”

He never asked where my momma was when the “fun stuff “was happening he just shook  his head in dismay. He never said an unkind word about mamma. He told me she had something called Paranoid Schizophrenia. He said if she took  her pills she would be ok. But if she drank alcohol instead of taking her pills she would not be well. I just wanted a normal mamma. A momma that didn’t scare me.

I continued to torture the beast with an “Ole’, Ole’! Flapping my invisible red cape Ole’!

Barama was snorting at my heels nostril gapping, I felt the horn touch my back. I was  almost  to the fence made a dusty face plant, dive under the  wooden planks, I could hear the Brahma’s horns hit the barrier between him and me “crack” was it my back or the wood? Was I alive? My heart beating so damn fast  from fear and utter excitement! I looked up and on the other side of the gate was my new friend Mr. Big Fat Bull. I think he liked the challenge, I know I did! Near death fun made me feel alive! I was fucking Super Woman!

I got bored when Momma and Scary Man went hunting on horseback  with rifles strapped to their backs  through the pines in search of poor dear Bambie. Uh, I hated it! Poor Bambie all skinned and hung to bleed, the smell of deer blood and beer would waft through the kitchen. Yuck!

“ It’s Venison,  If you are going to kill an animal you have to eat it.” Momma would say.

I continued to “play’ with my new friend the Big Fat Bull. I think he like the company  too! I brought my liquor store Barbie to share in the fun. Her legs kept falling out of the cheap plastic sockets. I liked to throw her under the fence and watch Brahma hit the fence! He would turn around and stare me down and I would run full speed at him give him a slap  on the butt and dive for safety into Liquor Store Barbies arms.